I don't usually buy into advertising campaigns. Mid-2012, Lay's Potato Chips started a contest for a new flavor: People submitted suggestions and they created chips based on the top few choices. Cheesy Garlic Bread, Chicken & Waffles, and some hot sauce one were the top picks. Whichever of the three had the most sales would join the lineup permanently.

Every time I went to the grocery store, I looked for them. Months. Finally I found a Lay's person restocking and asked about them, and he said they likely would never get into this area because of where we were compared to where the factory is. (Surprisingly, because we're too CLOSE to the factory. How it works is that they send chips first to the furthest place, then if they don't need to restock there, the next furthest, then if neither of those two need more, the next furthest... So basically, because of how popular they are, all those far places would need to be restocked before close places got them once. The things you learn while on a quest for chips!)

The contest ended at the end of 2012, but I still kept checking our chips aisle out of habit. Weekly for months. These new chips never showed up. Then I had to go shopping because I needed lower sodium things, and I laughed as I checked the chips section. What were the chances that THIS week would be the week they showed up? 100%, turns out.

I couldn't resist getting them. I spent nearly a year trying to get them, and there were only about 6 bags total of each (had their own little cardboard display instead of on the shelf), so I got a chicken & waffles and a garlic bread one.

I tried the chicken & waffle one today. 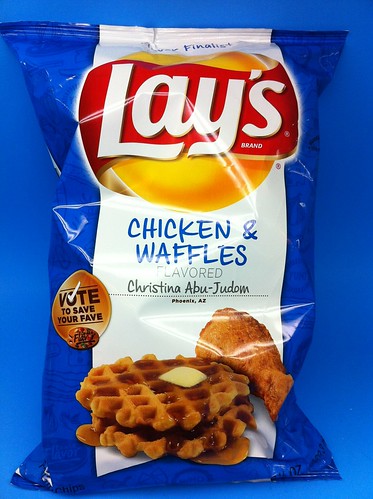 (Oddly, my bag doesn't have the woman's name on it. I guess they're still making them, even though the contest is long since over, and don't want to publish her name anymore?)

If I had to sum them up in one word, it would be "weird". Not bad, just very very strange. The waffle flavor tasted only of maple syrup, but they did indeed taste like they has chicken in them. I wouldn't buy them again, but if I had no care as to diet, I'd finish the bag. As it stands, I ate a few and tossed out the rest of the bag.

I'm glad I finally got to try them, but no potato chip is worth spending a year looking for. Word in food review blogs is that the cheesy garlic bread one is a lot better, but as that's a more common flavor, I don't know if I'll mention it here when I try them. (One day I'd like to try chicken and waffles in a non-chip form. Seems like an interesting idea.)

Netflix is making some really nice original shows. I loved Orange is the New Black, and I just started watching House of Cards today. House is much harder for me to watch, because you really need to give it your complete, undivided attention, but it's worth it. I've only watched the first ep, but there's so much happening! The main character (the majority whip of the House) sets out for revenge when the president elect breaks a promise to him.

Kevin Spacey plays the main character, and he's the most amazing thing to ever appear on a screen. I love accents, though to be honest southern accents usually do little for me, but his South Carolina accent is the most sexy, interesting, pleasurable, scary thing to listen to. The old joke about being able to listen to someone read from the phone book? Works here. Forget about the plot, characters, great production values, amazing score, his voice alone makes the series worth watching.

If you have Netflix and haven't yet checked it out, do yourself a favor and do so!
Collapse