I never go to state fairs, so I miss trying all the fun foods. I never had a deep fried cookie, never had a deep fried candy bar, the last funnel cake I had was almost twenty years ago. (I vow to one day try chocolate covered bacon.) Now and then one of these wacky foods appears outside of fairs, and I make an effort to try them then.

You can't tell by that picture, but the bag is very small. Think the size you pick up when you get a sandwich at Subway or some other sandwich chain. A single-serving sized bag. The $3.50 price would seem very high for that amount.

The chips have chocolate on only one side: 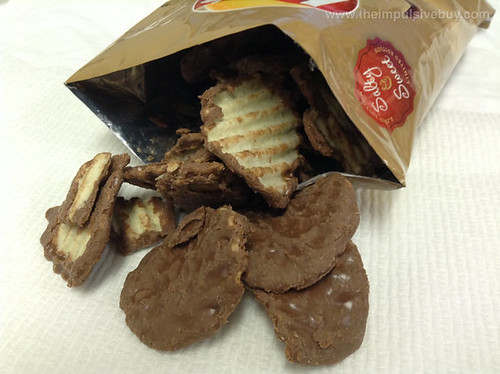 So you'd think with the tiny bag and the half-covering of chocolate, the $3.50 price price would be out of line, but I don't think it is. The chocolate is really, really thick. Like three times as thick as the chip. (I didn't get an odd bag, other reviewers have mentioned how thick the chocolate is too.) If it had chocolate on both sides, that would be too much.

How did it taste? On first bite, I thought I didn't like it. Salt + chocolate = Yay! Salt + potato = not so yay. But then I ate a second one and a third one, and I stopped tasting the potato and just tasted the chocolate/salt.

Interestingly (probably because of the thickness of the chocolate) it only took a couple to be satisfying. While they were good, I didn't have a hard time putting the rest of the bag away.

...holy cow. The tiny bag has FIVE servings in it! A serving is four chips. If you can stick to one serving, the calories aren't too awful (160). I wish they put the number of servings and calories as the biggest items on food packaging (kind of like how the warning is so big on cigarette containers).
Collapse