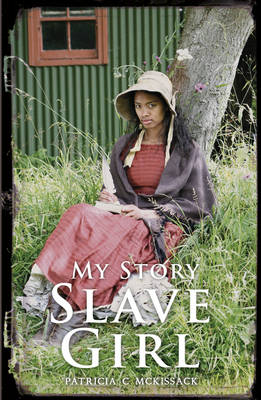 To say I'm not a history buff would be an understatement. I really, really do not care about what happened in the past, I'm a lot more interested about what will happen in the future. And, of all the possible subjects that fall under the header of history, the American pre-Civil War south is very, very low on the list. So I was surprised at how much I enjoyed this book.

As the title implies, My Story: Slave Girl was the story of a slave girl on a plantation. Though her owners did not want their slaves to learn to read or write, she picked it up because she had to attend every lesson the son had, so she could fan him and the teacher. Knowing how to read opened all sorts of doors for the already smart girl.

While for most of the book there seemed to be no plot (the book was actually her day-to-day diary of life on the plantation), near the end one came into being. But either way, plot or no plot, the book was really enjoyable -- her voice was so strong, and there were so many details on how things were back then. (Though, published by Scholastic, this book was aimed at young readers, so I know a lot of the bad stuff was glossed over. In the years the book covered, there were only two beatings, and one scene that might have lead to rape if the main character hadn't been clever about it.)

I was surprised to learn that this story wasn't fiction at all -- the main character was a real woman, all the stuff that happened in the book was real. The author had sat with the real woman to get her whole story down, saw photographs, etc. I kind of liked the story better when I thought it had been fiction... I guess it was easier. Even if the bad stuff was glossed over, it still made me uncomfortable to be reminded that all this stuff happened to real people...

In my effort to find some new series to watch, I gave Supernatural a try. I tried to get into it once before, but gave up in the pilot. This time I'm up to episode 10 of the first season, and while it still hasn't hooked me, I'm okay enough with it that I'm going to continue on.

I was happy to read that, after the first season, it gets less scary. I had a number of 'hairs on the back of my neck standing up' moments. The poltergeist episode especially. The Poltergeist movie really bothered me as a kid, and I swear, poltergeists are the fictional thing I'm most scared of now. It's silly, because I do not believe in ghosts, but a show or movie about them? My eyes actually tear up in fear. (When people joke about protecting kids from TV/movie stuff, I always remember this example -- it really can have a lifelong effect on people.)

Anyway, I really hope I do get hooked on Supernatural. With 10+ seasons, it would keep me in stuff to watch for at least a week. :P
Collapse