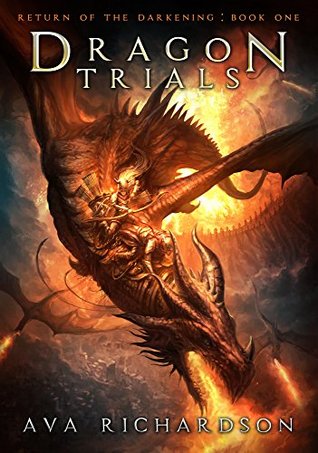 Sometimes you CAN judge a book by its cover. See the cover above? Isn't it cool? Well-made? Interesting? The whole book is!

Going into this story, I knew it was about kids bonding with dragons, so I figured it would be Pern-like. Turns out it shared very little with the Pern world. While people did bond with dragons, each dragon picked two people, not just one, which was a pretty interesting idea.

Chapters alternated between a noble girl from a family known for producing the best dragon riders, and a peasant boy, the son if an alcoholic blacksmith. The two got picked by the same dragon, so had to not just learn all the training to become dragon riders, but how to get along with each other.

The dragons were quite interesting, and drew from How to Train Your Dragon more than Pern -- the main characters' dragon was very cat-like and reminded me of Toothless from HTTYD.

The chapters alternated between the two main characters, which worked, but I would have rather it stuck with just one POV... The problem is, I wanted to see both POVs, so alternating was the best choice, even if I didn't like switching back and forth between them.

Both main character kids were very realistic and believable -- so rare in YA books! They were flawed and sometimes annoying, but it made them only more realistic.

The writing was good, though the editing wasn't 100% perfect -- but as this book was self-published, it was a whole lot better than average. Leaps and bounds better. Even traditionally published books rarely have perfect editing anymore, so this one was on par with those.

This was one of those rare self-published books I wondered why was self-published. It was easily good enough that some publisher should have snapped it up.

Best of all, the ebook version of this book is currently 99 cents at Amazon (link at the top of this post -- I get nothing if you click it). It's worth so much more than that! Grab a copy today!