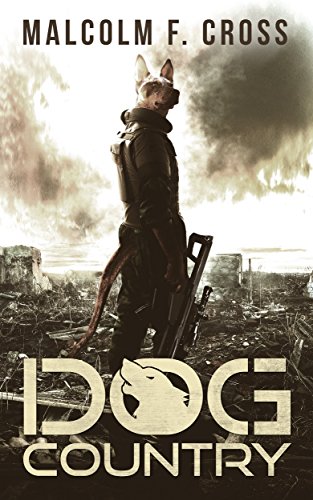 I feel bad giving this book a 'disliked' rating, but... I just didn't like it at all. It was technically well-written, and the 12% I read was edited perfectly (rare for a self-published book!), but the story itself had too many issues for me to keep reading.

Set on Earth in the current-ish year, geneteching was a big thing. Someone (the government?) made humans mixed with dogs to use in wars and other industries. Design one dog type, brew a set of clones, and you have forces for your army. Interesting idea! Even more interesting was that the book opened right as the war ended. What would these dogs do, when they were created and geneteched to do one thing, and that one thing was no longer needed? (The fact that the government could just kill them all off was handwaved with a couple sentences about how the geneteched animals were given their freedom and status equal to any non-geneteched person.)

The dogs were playing in "milsim" games -- military simulation, which apparently is both a pro and non-pro sport in this world. Still, interesting idea. Then the story started to get bogged down with details. One of the Amazon reviewers called this not just military scifi, but heavy military scifi, and that was right. Page after page about how the troops moved on the game field, detailed description about cleaning guns, etc. But okay, if the military end of things didn't work for me, I could focus on the dogs' relationship, because that was interesting as well.

Until the girlfriend was introduced. Turns out, since these dogs were geneteched for war, they didn't know how to handle even the most basic part of relationships. (So why the main character dog had a girlfriend was beyond me.) This girlfriend (also a geneteched animal) wanted to have sex all the time, and even though the dog didn't know anything about sex, didn't understand it, and did not like it, the girlfriend pressured him into doing it multiple times a day. What kind of girlfriend does that? Sheesh... Then this dog went full-on autistic-seeming. He didn't even know the most basic relationship stuff (like why someone would draw a heart for their loved one). It was like he was a totally different character... Plus I felt like I was dealing with Sheldon Cooper from Big Bang Theory. Same storyline -- girlfriend pressures boyfriend who neither likes nor wants to have sex into having it.

Usually when I don't finish a book, I like to post a couple of them at once. This review got long though, so I'm going to post it on its own. Plus I think the next book I'm reading (The Magnificent 12 by Michael Grant) will be one I finish.
Collapse