The Forest and the Farm by Vance Huxley
Rating: Liked (Hated-Disliked-Okay-Liked-Loved) 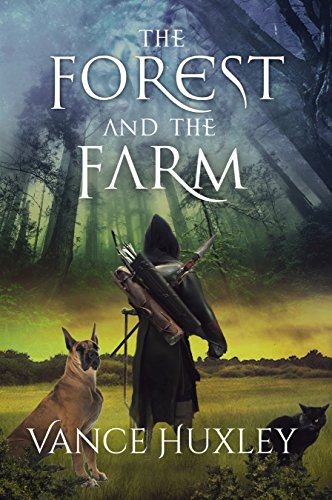 This was a very odd book. A YA book takes me about four hours to read, an adult one about six. This one took me 12 hours per my Kindle, yet Amazon lists it as only 488 pages... I started reading it a week before 2016 ended, and only finished it last night (and that was with more reading time than usual, because of the holiday).

So, as long as that book was, lots of stuff should have happened, right? Nope. There was oddly very, very little plot in this story, it was just a man's day to day life across years.

At first the reader has no idea where the story is set. I figured it was a generic fantasy world. On it, there are two areas: The Forest and the Farm. Areas that fall under the Farm belong to people. All others, the Forest, belong to the Wild. Humans have no tech -- bows are the highpoint of their weapons; potbelly stoves in a house is a rare sight and a sign of great wealth.

Balance that against the fact that everyone had a name that was just a little off from our real world: The main character was a man named Billi. Other names included Abbe, Edan, Eddwyn, Ellibeth, Ewward, etc. The animals of their world had the same "like ours, but a little off" patterns. Some animals had no name (like "dappled hunter" for a spotted hunting cat -- leopard?). There were Great versions of animals, too (Great Wolf, Great Stag, etc) -- those animals were a lot larger, stronger, and smarter than the non-Great version.

I love interesting worldbuilding, so that hooked me. Eventually, as the story moved along, I came to think that maybe this book was in fact set on Earth, sometime long after the world "ended" and most people died off. (That's not a spoiler, just my guess.)

The story followed Billi. In this world of such dangerous Wilds, there are Hunters and Hounds. Now and then a Hound (perhaps a Great Dog, some people thought) would come out of the Wild and choose one man. That would make the man into a Hunter -- someone able to go into the Wild to hunt. No one without a Hound dared enter the Wild, it was just too dangerous.

Billi was an unexpected Hunter as he had only one leg. The story followed him as he went from basically being a loner outcast to a full, respected, productive member of his village.

Like I said, this book was very odd. Through most of it, "nothing happened". There was no one plot through the whole story, other than Billi's evolution as a person. Rarely I got bored with it, though when I hit the last 10% of it and realized there just would be no climax (no plot = no climax) I started skimming, but otherwise I still enjoyed it.

There was one small part I had serious issue with. This story seemed to be set in a real world, there was no magic at all mentioned, ever. At one point in his life, Billi met a woman who seemed to be able to turn into a wolf and back. She arrived naked through a snowstorm, not cold or shivering at all, spent a few days having sex with him, then turned into a wolf and left him. I could almost handwave it as a dream (that somehow lasted days), but his Hound saw something as well...

All in all, this was a nice story. "Nice" really is the right word for it: Mellow, mild, unoffensive, non-exciting, yet warm and... well, nice.

Edit: I meant to mention that Billi's disability was written so believably well. Turns out the author is as well, which shows through the writing. It was so interesting to have a realistic look at something I'll hopefully never experience firsthand.

Edit 2: This book was so long, I forgot things I meant to mention! Another aspect of the book that annoyed me: Only men became Hunters. Why did Hounds only choose men? Seemed silly to me. Also, by the end of the story, every woman in the village was chasing after and flirting with Billi. While coming to that point was believable, it was kind of over the top (and also part of the reason why I skimmed the last 10%). Even if I had known those points in advance, I still would have read the book, but they were issues that should be mentioned.

Being two or so weeks since I abandoned it, I'm having a little trouble remembering why. I think the usual "flat writing and dated" thing, as it was published in the 1970s.

In it a girl was sent back in time (never explained why or how in the 14% I had read). Per the Amazon summary, she's found by a tribe of humans, but I stopped reading before that happened.

Know that annoying feeling when your username is taken by someone who hasn't used the site in many, many years? I suspect a number of people on Goodreads felt that about me.

Apparently back in 2009 I snagged the name Thistle, added one book to my 'currently reading' list, and never did anything further on the site. My account is still there though, so I dusted it off and crossposted my The Forest and the Farm review to it.

I'm not sure what the benefit of posting there is. (It makes me a little more worried that the author will see my reviews.) I'm going to try to post at least my completed books there though, and see how it goes.