Before my review, a couple Goodread things: Ugh. Only after I copied in 160 reviews did I notice their whole star system is wrong. WHY oh WHY do places weigh things towards the more positive? They have five stars, but the meanings of them are: Did not like, okay, liked, really liked, amazing. Out of five, there's only one negative! And it's as un-negative as they could make it ("did not like" instead of "disliked"). Why is it not evenly balanced on either side of the 'okay'? Not to toot my own horn, but like the system I use: Hated, disliked, okay, liked, loved. UGH.

Anyway, I'm Thistle there (https://www.goodreads.com/user/show/2748685-thistle) if you want to friend me.

It looks like I'm not going to get my earliest reviews copied over there. It was only mid-2013 that I started writing better ones, with ratings and not just one paragraph about the book in the middle of posts about other things. The earlier ones are generally just too messy to share there.

People of the Sky by Clare Bell
Rating: Loved (Hated-Disliked-Okay-Liked-Loved) 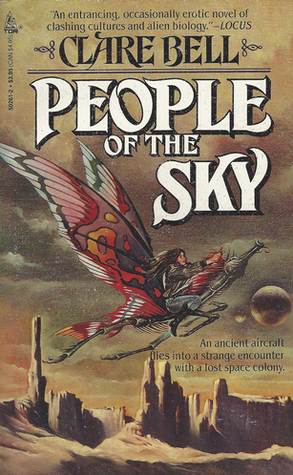 If you told me a book that included bestiality (is sex with insects still called bestiality?) and mpreg could get a 'Loved' rating from me, I would laugh at you. And yet this book did.

Set on an alien planet, a woman named Kesbe is delivering an old airplane. It crashes in a storm, and she encounters the planet's natives -- descendants of a lost Native American tribe who took to space to escape the problems of a dying Earth. Being of Hopi blood herself, she feels a kinship to these lost people, and tries to join their society.

There were so many interesting themes in this story. Accepting yourself (as a person, as a woman, as a member of a group). Love (LOVE LOVE LOVE! No matter the shape the other individual takes).

The worldbuilding was jaw-droppingly amazing. The writing in all aspects was outstanding.

Rereading books I loved when I was younger is risky. Tastes change, and if I dislike the book on second reading, then that ruins my memory of it. Luckily, in this case, I think I liked it even more than when I was younger. The main character was an adult woman, and I could more easily relate to her now that I'm an adult as well.

I really, really wish I could have been rereading it for the first time though. I remembered some of the twists ahead of time, and knew how the whole thing ended. Still, this was one seriously enjoyable read.

It pains me to have to include that this book had any problems, but unfortunately it did have one: There were a couple dozen typos, misspellings, and grammar issues. That does not at all take away from my strong recommendation of this book.
Collapse