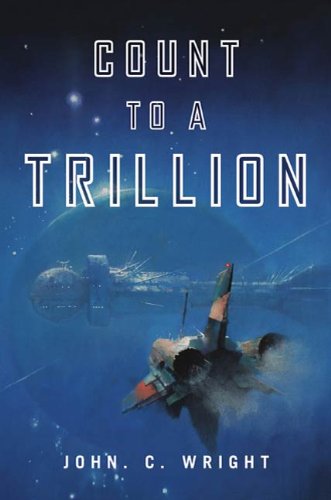 I try not to look at others' reviews until I'm done with a book -- I like forming my own opinions based only on what I read. The added bonus to that is that seeing what others thought is a fun reward for being finished with the story.

In the case of Count to a Trillion, it was such a relief to see others really disliked this book as well. In my short time on Goodreads, I've seen very few books with one star ratings. This book has many of them.

At first the story itself seemed interesting. Set in the distant future, the Earth was a mess. Some sort of plague killed off a whole bunch of people. The main character, a child, was quite interesting -- more intelligent than anyone around him, very gifted. But quickly the story became seriously muddied. We went backwards and forward in time, the dialogue was really 'off' to my ear, and this whole new ruined Earth really wasn't explained all that much (Why were lawyers gunslingers?).

I gave it two nights of reading, got to the 12% mark, before giving up.

Currently reading: Iron Edge, about a man who is being sent back and forth between two worlds without control or awareness when it will happen.

NPR has been hitting it out of the park for me lately. So many interesting things were talked about this morning!

First was a story about an English cathedral with a rather unique welcoming message on their door:

You can listen to the full story here: Link.

The second might be news only to me, as he's been on Conan now. Disturbed is a hard rock band, but the lead singer had been raised as a Hazzan (a Jewish person "trained in the vocal arts who helps lead the congregation in songful prayer"). He did a cover of The Sound of Silence, which is beautiful. He makes it sound like a more traditional religious song, his voice is so rich and wonderful: