Before the review: I decided to further adjust what counts towards a book in my count for the year. If I'm now keeping a running tally of my partially read books, why should a book I've hit the 50% mark of count as a full book?

However, as I'm keeping a running total of how far I've gotten through abandoned books, I should get an overall more fair, accurate count of my reading total for the year.

This change brought to you by the letters G, S, and the fact that I had 72 abandoned books last year and gave myself credit for only one full book for all of them. 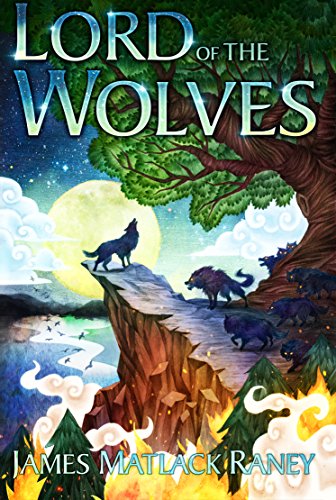 This was an odd book. A "talking animals" story featuring wolves, but they were basically just people/humans. I have no idea why the author decided to make them wolves.

The alphas of the pack were called lords/ladies. 'Sire' and 'my lord' were used on a regular basis.
The wolves cried (tears) when they were upset.
The wolves screamed.

Even on top of that, the story was just not all that good. A litter was born when the sun and moon were both in the sky (which the wolves said happened only once in many generations...), which meant everything about the litter was different. The first was born twice as big as any other pup, with paws the size of a one year old wolf's (ow, that poor mother wolf). One was born with open eyes, able to see/process anything from the moment he was born. One had a super-powered sense of smell. One was beautiful.

And man, talking wolves are so bad at naming their pups. The pup with his eyes open was called Watcher. The super-smeller was called Windy (because she could smell any scent on the wind). The beautiful one was called Glimmer.

I was willing to go along with the story until the bad guys were introduced. Even more unreasonable characters, completely and utterly un-wolf-like behavior. Black/white characters, not a single shade of grey. (The bad wolf pack killed every single living thing in the forest...)

The whole story felt like the author took some famous fantasy story and rewrote it (poorly) with wolves as the characters, though I can't pin down which book this feels like...

I wanted to stop reading at the 40% point, but pressed on to the 50% point so I could get credit for the whole book, which is what made me realize I really needed the rule change. So thanks for that, Lord of the Wolves!