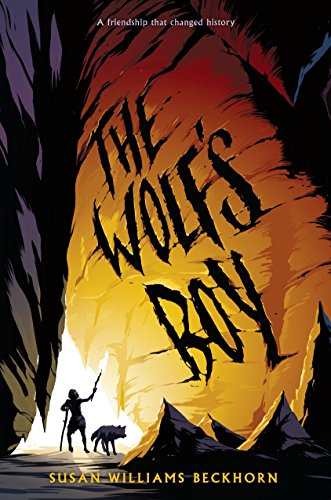 A couple years ago, an author of a YA book series I loved told me that the only difference between YA books and books for older readers was how long the book is. I've found that to be the truth. A good story is a good story, YA, adult, or otherwise.

The Wolf's Boy is for readers in grades 4-8 (so one step younger than YA), yet it even to adult reader-me it was one outstanding book.

Set in prehistoric times, the main character (Kai) was born with a deformed foot. In his tribe, any deformed babies were left out to die. He was, but a wolf who had just given birth found him and took care of him. A short time (days? weeks?) later his mother found him again and, since he hadn't died, was permitted to bring him back home.

He was still deformed though, and an outcast among his people. Cursed. Bad luck. He had no name (no adult name, no "real" name), and wasn't considered a man of his tribe. He was not permitted to touch weapons or have anything to do with the hunters.

By chance, he found a wolf pup and raises her. No one had ever done that before. It was such a wonderfully written story: The wolf pup was 100% believable as a wolf, the boy was perfectly human, all the other characters were so totally realistic.

And then the book got even better. In part two, we met an "ice man" -- a neanderthal. I actually liked that part of the story even better than the part about raising the wolf!

The whole book was just so perfect. The writing was outstanding, descriptive, perfectly believable. The characters, from main to minor, were great. I loved the whole story so much.

The only thing I didn't like was how short it was. YA books take me about 6 hours to read, this one took me just over 4. I wanted MORE MORE MORE. I especially wanted to know more about the ice man character.

Do not pass up on this book just because it's meant for younger readers.
Collapse