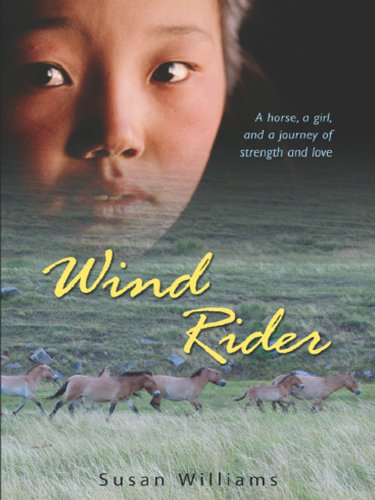 On the surface, Wind Rider looks very much like the author's other YA book, The Wolf's Boy (the last book I reviewed, here). In that one, a boy brought the first dog into his tribe, something people had never seen before. In Wind Rider, a girl tamed the first horse and showed her people how helpful that could be.

Like Wolf's Boy, Wind Rider is a YA book that worked perfectly for adult readers. The storyline was wonderful, and it never once felt like the writing was too simple. Though the main character was young, she faced mature situations (including one almost-rape, though subtle enough that younger readers wouldn't realize the exact danger she had been in).

Fern, the main character, had loved watching horses all her life, but a chance situation put her into position to tame a young one. The story took its time building trust between the horse and the girl, and their friendship was perfectly believable. (Heck, everything about the story was.)

While Wolf's Boy was about a "deformed" boy (he had a bad foot), Fern had more challenges in her world just because of her gender. She didn't want to be just a wife and a baby-maker, which made her character arc through the story one of the most satisfying examples of character growth I've read in a long, long time.

I strongly recommend both books by this author!
Collapse