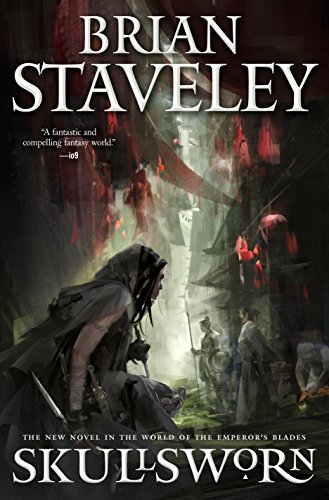 Know the trope "A woman has to meet and fall in love with a man in a short time or something bad happens"? Imagine that trope written in the most un-romance book way possible, and you'd get this book.

This book. This wonderful book. I was crying by the end, and I didn't even know if they were happy or sad tears.

The story is told in first person from the POV of a woman in training to become a priestess of the god of death. She's just starting her Trial to become a full priestess. To beat her Trial, she has to kill ten people. One of those ten is someone she loves.

For a woman without family and who never has been in love, that's one giant stumbling block. She has 14 days to complete her trial, which means she has to fall in love and then kill that person within two weeks.

But that's just the tip of the plot iceberg! There's a man she felt a connection to in the past (did she love him? She doesn't know herself, so we never know either). She travels back to the city she grew up in to find him and see if she can make herself fall in love with him.

There's wonderfully complex world building, and the characters are just so damned amazingly realistic. Politics, a revolution, and all sorts of different gods. The story's world felt like it had some serious history behind it, you could feel the weight of that past in all the details. The writing as a whole was outstanding! (That feels like such faint praise compared to what this book deserves.) I should be in bed and asleep right now, but I couldn't possibly sleep until I got all this written up.

One of the best things about the book was the character's journey. She came to understand love and death, and I feel like I made just the same journey through her.

Plus the story does not end how you expect it to, in so many ways. Every single one of the book's many plotlines ended in ways I never would have guessed.

I loved the characters so so so much. Now that I know how it ended, I want to read the book again so I don't have to say goodbye to them can see what I missed as I read without knowing the truths we learned at the end.

Ugh, this book. It was so good! Reading the Amazon reviews, people thought this was bad compared to his first trilogy. That boggles me, because if this was "bad" then his other books must be out of this world. Well, I'll know eventually, because I'm going to read them soon!

Reading next: Nyxia by Scott Reintgen, because I accepted it for review, so now have to read it even though I'd rather read something else. I'm sure it's a good book as well, it sounds interesting, but I'd really rather read Brian Staveley's other books.
Collapse