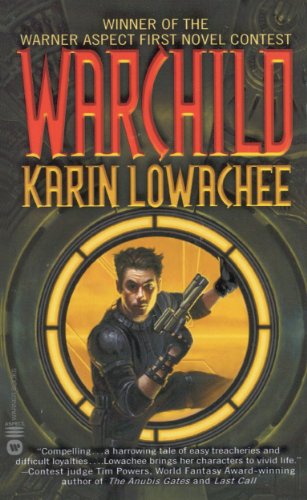 I almost never reread books (I have too many new ones to read!) but I loved Warchild so very much, I've been itching to reread it. I read it for the first time on my vacation last year, so seemed like a good idea to reread it during my vacation this year.

At first I thought I lost the magic of the book. Through the first section (the second-person POV when the main character is the youngest), I actually didn't like it... It was only a couple days later that I realized the issue was probably me and not the book. (I was on a redeye flight, started reading it at 3 AM when all I really wanted to do was sleep, and I was bored and unhappy. Not at all a good mindset for reading.)

Anyway, after that first day of reading, I LOVED it. Gah, the journey the main character (Jos) takes! Rollercoaster of emotions! Nonstop questioning of who he can trust and who will break their relationship with him this time! Not to mention, all the abuse he suffers! Ugh, this book, it broke my heart and I loved it for doing so.

As with my first reading, I hated the ending, but only because it was an ending. I want need MORE MORE MORE of Jos and Niko! At least, unlike my first time reading, I didn't think books 2 and 3 would give me more of their story (talk about a major disappointment!).

In my earlier review of it (here, I wrote:

This book was AMAZING. A week and two books later, it's still in my head stronger than any other book has ever been before. If I had paid an author to write a book perfect for me, this book would have surpassed even that.

That still holds true. I loved this book so very much, and I want to read it a third time... without waiting for next year's vacation. 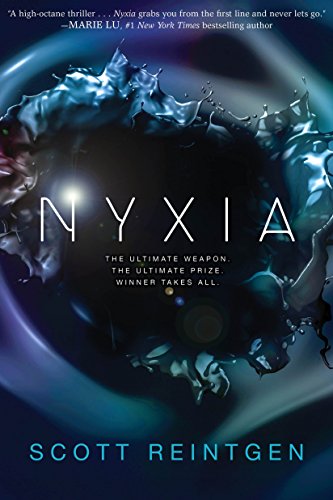 Set in the near future, some company founds a material (Nyxia) on another planet. Nyxia is able to be almost literally anything. Need a universal translator? Need a camera? Need medical equipment? Need a power supply for your iPod? It can be anything just by thinking about what you want it to be. It can do anything. (I'll admit I had some serious issues believing it, but... fictional book. I tried to just accept it and go with the story. And, by the end, I was suspecting that the future books would make me believe it.)

Problem was, the planet had aliens on it, and the aliens kept trying to kill off the humans. For whatever reason, aliens really like children, so the company recruited a bunch of kids to go to the planet and mine the Nyxia. (Again, my ability to believe the story was being stretched.)

The company, being a typical coldblooded, money-grubbing company, set up a contest to see which kids would get to go to the planet. Typical fighting, breaking them, testing them, giving them an okay to kill each other, all that.

I actually stopped reading the book at the 30% point, but I did something I've not done in years: I went back to it and finished it. And amazingly, even though I returned to it after a book I loved (Warchild), I got back into Nyxia and read the whole thing. (I never ever usually like the book I read a book I loved.)

When I finished the book, I was somewhat frowny. There was so much I had a hard time believing (including multiple characters, which is usually the kiss of death for a book), I had felt sure I wouldn't read the rest of the books in the series. But it's been a couple days now, and oddly I cannot stop thinking about this book. I'd read the second book if it were out now. While the book did not end on a cliffhanger (kudos for the author!), it did leave a whole lot of the story left unexplored, including the true nature of Nyxia.

It's rare that I question so hard what to rate a book. There was a lot about Nyxia that didn't work for me, and at the time I was reading it, I wasn't hooked or completely liking it, but it's like it hooked me once the book was finished... I had been pretty certain about ranking it an 'okay' but I guess I'll switch it to 'liked'.

Being offline for a week is rough. Even with my phone, I couldn't keep up with anything. Not to mention there's a week worth of work waiting for me at my job...

My poor kitty has brain damage from being at the vet for a week. She wanders around the apartment and calls for me as if she were lost (or I was?). She also wakes up abruptly and calls for me. At the moment, she's behind my bed and will call for me every few minutes, which is odd since she has a cat bed on the desk within arm's reach of me... Kitty brains are odd.

It was very good to see my mother, and we did some fun things in Maine. Two zoos (York was wonderful, the Grey Animal Rehab center was bad to the point I worried for the animals). The weather was awful (every day but one the high was 55 and it rained). The last day was in the 70s and beautiful, and I got a bad sunburn at the zoo. :P

Unfortunately the flights, especially coming home, were awful. Eight hours of delays in Chicago (some kind of issue with the San Francisco air traffic controllers). Then they lost my bag... It's been 24 hours now, and still no sign of it. On one hand, United "knows" it's in San Francisco, so technically it's not really lost? But I'm not a big clothing person -- I only own five pairs of pants I could wear to work, and four of them are in my bag. The loss of it would be a very big issue for me. The baggage delivery company they use sucks. I can't get an ETA or even acknowledgement that my bag even exists, 24 hours later.

Uber is such a wonderful thing. For $14 I got a ride from the San Jose airport (see the issue with my bag being in San Francisco?). I did have to share it with one other person, and that person got dropped off first even though I was picked up first, but still! Fast trip, cheap price. It was the high point of my trip home.

It's so good to be back!

Edit: Good work, United. Apparently my bag was sitting in San Francisco all day, because they didn't know I wanted it delivered. Even though I filled out a delivery form with the United baggage support person and have a copy of it in my hand... It would have just stayed in that other airport if I hadn't had called to check.
Collapse