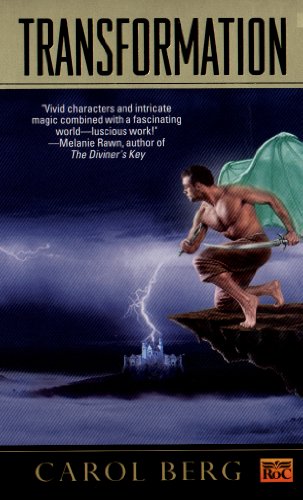 Set in a fantasy world that felt like what the Roman Empire might be like if it were founded by the Mongol Horde. The Derzhi Empire has conquered most of the world and has folded in all those various other nations into its big one. Most of the Empire knows of magic only as little tricks -- making small things appear and vanish, very small fireworks, etc. Only one small nation, Ezzaria, knows real magic. They also know that demons are real and plotting to take over the world. Only problem is that the Derzhi Empire conquered them, destroyed their magic, and enslaved most of the remaining survivors...

The main character is Seyonne, an Ezzarian who has been a slave for more than half his life. He's accepted his place in life as best he can, and is just surviving day to day. That is, until prince Aleksander, heir to the Derzhi Empire, buys him and brings him to court. Court, where demons are in the process of taking over the Empire.

All in all, I enjoyed this book. Early on I loved it, but as I read (and read and read and read -- it felt so long) my enjoyment cooled a bit. The relationship of Seyonne and Aleksander was by far the most interesting part of the book, I could have taken or left the whole demon plot. The world setting was interesting if not completely unique. The writing was mostly good (but I wish there had been a ton fewer flashbacks -- it felt very much like the author was telling us stuff instead of showing it naturally through the story).

There are two more books out in the series, but this book ended on a nice note and I don't feel the need to continue it. The positives way outweighted the negatives of this book, but it felt like it took me so long to read it, I want to move on to something else. Hm, my last review was July 7th, so it really did take me a long time to read this one. Though Amazon says it was only 452 pages, which is just a normal book length, so I guess I just kept getting distracted from it (the downside to keeping your phone next to your bed...).

Edit: I forgot to mention, this had been the very oldest book on my Kindle! And it was recommended by someone on LJ, too. If I were at home and could access my LJ backups, I could look it up and see who had recced it. Thank you whoever you are, if you're still active on LJ and reading this!
Collapse