A Whisper of Horses by Zillah Bethell
Rating: Okay (Hated-Disliked-Okay-Liked-Loved)

isiscolo?) had reviewed this book, and I picked it up based on that. Their review hadn't been glowing, and I find that I agreed with all the good and bad parts they had noted.

The story was a typical YA dystopian tale. I liked a lot of it, like how the language had evolved (Lahn Dan for London, Gray Britan, etc), a lot of the writing (image-wise, phrasing, dialogue) was excellent. The problem was the characters (and, well, much of the world setting). Everyone was black/white -- one lonely rich woman, when mildly thwarted by a girl she (somehow) liked enough to want to adopt moments after she met, went out of her way to destroy that girl when she didn't agree to be adopted right then and there.

The world setting was just plain stupid. There were three classes, Aus, Cus, Pbs -- gold, copper, lead. But they were called that in the book: Aus, Cus, Pbs. I just could not see a society evolving that way. Classes like that, sure. But naming them like that? No.

Add onto that that the main character (a Pbs, so she had no food, never took a bath, etc), was more beautiful than any Aus (who had all the food they wanted and gene teching to be made more beautiful), and I was just done with this book at the 24% mark. 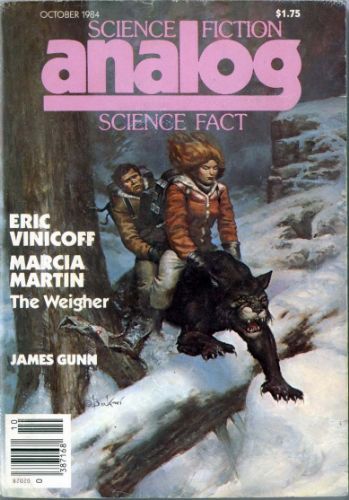 For the longest time, this had been my favorite story I ever read. It started as a novella (1984) and then in the 90s was fleshed out into a full novel. When I downloaded it for my Kindle, I wasn't sure which version I was getting -- I hoped for the novel, but it tuned out to the the novella.

Set on an alien planet, the natives were sentient big cats. Like the big cats of Earth, they were strongly independent and barely social at all -- to live together, they needed individuals who acted as Weighters (judges/peacemakers/accountants all rolled into one).

The story followed one Weighter as humans arrived on her world and changed everything in good ways and bad.

My "problem" with this story was only that I knew it too well. Though it's been many years since I last read it, I felt like I knew it word for word. Not only did I know the entire plot turn for turn, I felt like I even knew the phrasing and wording choice. While not fair to this story, I rated it a liked instead of a loved because it was just too familiar with it. As much as I enjoyed it, I was bored because I knew the whole thing already.