Oh how it pains me to not give this book a 'loved'. More Happy Than Not is by the same author who wrote the last thing I read, They Both Die at the End. Based on reviews and ratings, this book was just as strong of an emotional impact for people, but for me... sadly I had so many issues with it.

Like They Both Die at the End, More Happy Than Not was set in our world, just with a small additional tech advance. In They Both Die, it was Death-Cast, the group that called you 24 hours before you die. In More Happy, it was the Leteo Institute, which could erase memories from your head. Drove while drunk and killed your wife and kid? Chance accident kill your twin, but you survived? If you were lucky enough and rich enough to visit the Leteo Institute, they could erase it from your memories.

The main character of this book was a boy (Aaron) from the slums. For the first 50% of the book, this was nothing but the story of an average teenage boy who had a girlfriend, a single mother, and was very poor. This was very very much not a book I would usually read -- "slice of live" stories about teenagers put me to sleep.

Then at the 53% point, something odd happened: "I know this: Part of me was playing straight for so long..." And I just stopped reading and went BUH? For the first half of the book, there were NO NO NO signs at all that this kid was gay. He has a girlfriend. He loves her. He thinks about her all the time. He never once, in the first 53% of the book, ever once had a gay thought. (The story was told in first person POV.)

From that 53% on, we kept getting odd sentences like that. Him talking about how he was gay. Then he started hating his girlfriend, the girl he had loved so much and thought was so wonderful. I had thought this was a case where the author makes the woman into a bitch as an excuse or a push for the male character to go gay, and I almost stopped reading multiple times.

But then I put pieces together... [Spoilers]I started to suspect that the kid had been through the the Leteo Institute process. But how? It's so expensive, and the family is so poor that the two sons sleep in the living room in one bed... [End spoiler.] Turns out I had been right in my guess, though that still left lots of questions.

So I guess I just don't like [more spoilers]unreliable narrators [End spoiler]. I'm not sure if it was just written poorly and I might like that in other cases, or if that's normal and I just don't like that happening. I feel like the author cheated -- the book radically changed at the 50% point (though it made sense that it did).

In addition to that issue, I really had no emotional connection to this book. It felt like everything was over the top and too reactionary, but it's a story about a teenager, so I suppose that fits.

This was Adam Silvera's first book, while They Both Die at the End was his third/latest one. I like the threads connecting both books (such as a fictional book series mentioned in both), and I'll probably read his second book next. I just wish I had liked this one more.

Disclaimer: I actually have about 5% of the book left to read, but I have time to post this review now, so here it is. If somehow the end radically changes my opinion of things, I'll update this post. Also, I read the next book, Dun Lady's Jess, before They Both Die, but after reading that wonderful book, I hadn't felt like writing about Jess.

[Edit: Turns out I had 10% left, and the ending was very, very good. Enough to bump my 'dislike' rating up to an 'okay'. It was satisfying and emotional. I just wish the first 90% had been shorter or more like the last 10%.] 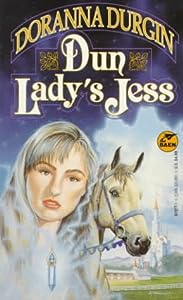 I read this book back in the 90s, when it was first published. I completely loved it, and it was high on my Favorite Books Ever list. When I spotted it in ebook format, I grabbed it.

Unfortunately, while there were some good parts of it, overall it didn't hold up. The story was about a horse that magically turned human. It opened set in a fantasy world, where a wizard found a portal to another world (ours). He hired his most trusted messenger to carry the details about how to cast the portal spell. Since some evil wizard was after the spell, he gave the messenger a necklace that would do Something if he was trapped and needed to escape. No details on what, just that it would do Something.

Even that far, my willingness to believe was being badly stretched. But then it got worse: Dun Lady's Jess, the horse-now-woman, was knocked out in the park. She was in a horse's tack, saddle on her back, bit in her mouth, all that. Naked. Knocked out. Two people find her. Do they call the cops? Do they call 911? Do they take her to a hospital?

No. They take her to their home.

I wanted to throw my Kindle across the room. A naked woman. Unconscious. In a horse's gear. And you don't call the cops? Seriously?

The story got even less believable from there. The author wrote one part well, I believed how the woman acted, as if she had really been a horse. But the rest of the story around that? Too many people acting way too unbelievable. I gave up at the 17% point.