Up until a couple days ago, I had only ever heard a few moments of any Hamilton song. I'm not into American history, and I'm not really into rap, and things that are mega popular tend to turn me off, so I never gave it a chance.

Then someone made a fan video for the game I play. Even though I don't like the character, the song was really catchy, and I found myself singing it endlessly, even days after first hearing it.

Finally curious enough, I googled it to check the source. Huh, a Hamilton song! After listening to it for a few days nonstop, I decided to see if I'd like the other songs as much.

Wow, I completely did. I can't believe how catchy they all are! And it's such a good story!

And now I'm one of you all, obsessed with it, plotting how maybe I could go see it live sometime. When I'm not listening to it, I want to be listening to it.

And that first song I heard, that started me on this road? His songs are still my favorites! 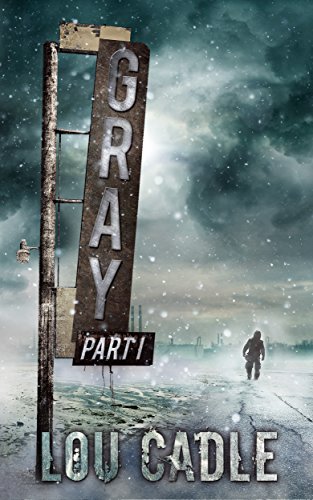 Much like Lou Cadle's later series (Dawn of Mammals, which I just finished), this book is about survival. In Gray, there's an Event. Something happens. Luckily a woman had been about to explore a cave, so when fire started falling from the sky, when all the land burned around her for days, she was able to survive by going deep into it.

When the world finally cooled enough for her to come out, everything was covered with ash -- gray. Almost everyone was dead. Almost all animals were dead. Everything was gone, burned to the ground. And she had to survive in that world alone.

One of the big differences between this series and Dawn of Mammals was that lack of other people. (And, you know, the lack of interesting prehistoric animals.) That was pretty significant, as without others to interact with, we were just in her head all the time. For me, that made for a much less interesting story.

This wasn't a bad book, I just didn't find it anywhere near as interesting as his other series, so I gave up on it at the 50% point.