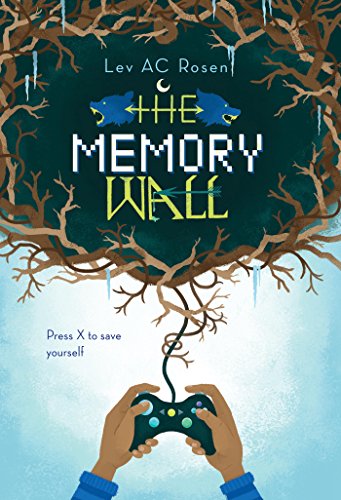 Long ago, an author had told me the only difference between YA and adult books was the length of the story. This book is further proof that that is the truth. Though this was a middle grade book (so meant for even younger readers than YA), it was outstanding for adult-reader me!

Set in the current time and current world, Nick's mother has early-onset Alzheimer’s. His parents make the (understandable) mistake of trying to hide just how sick she is, which means when she has to be moved to a care facility, Nick doesn't believe she's actually sick enough to need to go.

Half of the book is spent in our world, with Nick dealing with all sorts of RL issues. He's just starting junior high school, so he has to try to make friends, deal with a bully, cope with his mother being gone, with his mourning-but-trying father, and so many other things. All that while being in (understandable) denial about just how sick she is. He spends lots of time googling to try to prove she's not actually sick, that maybe she has something else and his father is wrong to send her away.

Remember last book review I said I had issues with "cis white male" being used in a book? The timing was amusing that I read this book next. It dealt with race issues (Nick's mother is German and his father is black, and Nick's best friend is half-Hawaiian). Gender and sex issues (his favorite teacher is lesbian and there's a seriously cool subplot about the bully being gay -- it's subtle though, young readers would probably completely miss it). There's lots of interesting information about recent history as well (his mother had been living in East Germany when the wall fell). None of it gets in the way of the story at all, I loved it all.

The other half of the book was spent in a video game. Nick is a gamer, and has strong connections to his character, so when he played we felt like he was actually in the world. Sadly (and surprisingly) this half of the book was weaker than the real world half, but it tied into the plot really well -- Nick is convinced a character in the game was actually his mother playing from the care facility so she could secretly contact him.

My issue with the book was very very minor -- nitpicking level. The video game's main story/questline was seriously short. This was a major game, very popular, and he finished the main questline in what seemed like four nights and a weekend day (and that's kid-nights, after homework/before bed, not all night long playing). If something like that is my biggest issue, you know this was a darned good story.

The author's writing was so good, too! I rarely save quotes from books anymore, but this time I kept stumbling upon things that were so well-worded, I wanted to save them.

"Nick recognizes only because he hasn't seen it for so long--the expression of mothers: the lines around the eyes that are like the lists of things they love and worry about."

"The sky is old-sword gray." I've never ever seen "old-sword" used to describe grey before. Metal sure, but never old-sword.

Sometimes it felt like he was talking to the young readers directly. One teacher said "we adult types like video games, too." which tickled me.
Collapse