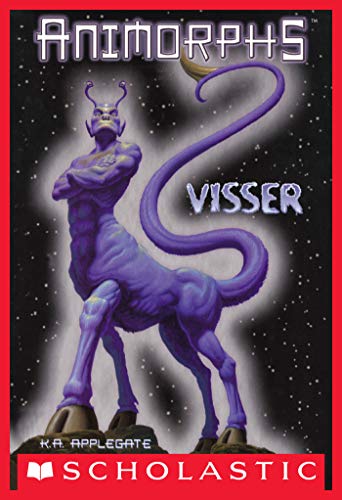 Even though I finished the Animorphs series months ago, there were a few "extras" books I never read. This is one of them.

First off: The cover is very misleading. The whole book was about Visser One, but that's Three on the cover. (And we won't even talk about the quality of that cover...)

I think I can better appreciate these extra books now that I've read so much fanfic, but it also underscores that good fanfic can make a much much better story of this material than the books themselves.

This story was an interesting look at the first stages of the Yeerk invasion of the Earth, told through the lens of a military trial being held against Visser One herself.

The whole Animorphs series always seems odd to be YA/MG. It's too mature, too dark. This book was especially so. Not just the horrible physical injuries (imagine being on trial for your life while in a body with multiple unhealed broken bones), not just the psychological torture (imagine having an alien control your body, get you pregnant, force you to have children), not just torture-torture (imagine being forced to shoot your own child)... but all of those in one book. A book meant for young readers.

More than all those things... when Visser One said she'd put a Yeerk into her daughter's head to make the child love her? Man.

This really was one of the best Animorph books. I just wish it had been longer.
Collapse